Berlin, November 7, 2014 – The documentary film MADE IN AFRICA follows a new generation of IT trailblazers pioneering innovative solutions to 21st century challenges, not in Silicon Alley in Berlin, but in the the hills around Kigali and Addis Ababa. Germany’s Foreign Minister Frank-Walter Steinmeier has cottoned on to the new wave movement and is set to view the film in Africa in the next few days as part of the German delegation tour through South-Africa, Democratic Republic of Congo and Rwanda. 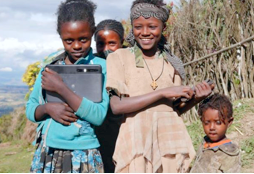 The documentary film charts the impact of digital technologies and innovation hubs and has turned to online crowdfunding platform Indiegogo to rally the mouse and click generation to take the message to the masses.
In the remote mountain-top village of Wenji, children are learning to read and write with tablets. And in the dusty streets of Kibera, one of the most densely-populated and poorest urban townships in East Africa’s biggest city Nairobi – at a school where children had never held a Smartphone or accessed the Internet – girls as young as 12 carry Kindles instead of schoolbooks and use them to learn maths, sciences and history. The 50 Kindles were donated to the school by a philanthropic reader from the US in response to a blog post published by one of the pupils. The story is a microcosm of a pattern emerging across Africa, a digital revolution offering broad participation and a multitude of new opportunities.

Nearly 40 per cent of Africans will own a smartphone by 2017, according to one study, making it the fastest growing digital market on the planet. Made in Africa travels to four African capitals to talk to the scene’s major players who are riding the first wave of digital innovation to change the lives of millions with creative reach on “the final frontier”.

From the dusty streets of Nairobi to the hills around Kigali, the feature-length documentary charts the growth of ‘hubs’ or incubators that have mushroomed from Addis Ababa to Cape Town through the lives of some of their most active users.

As Tayo Akinyemi, manager of the innovation hub network AfriLabs describes, MADE IN AFRICA “offers a much-needed, first-hand account of the booming tech and innovation scene. We need more stories about how the continent is changing its narrative, shattering misconceptions, and positioning itself to become a source of leap-frogging, globally relevant innovation. “Made in Africa” isn’t the typical tale of how, where and why Africa is underdeveloped. It’s an exploration of a modern Africa where digital entrepreneurs are hacking tough problems, building tech businesses, and catalyzing the next generation of African development.”

About Made in Africa

Made in Africa tells the story of a young generation of Africans on the rise, striving for success and independence, a story of innovation and technological revolution.Made in Africa will portray leading figures in different countries, tell their personal story and connect them to the bigger picture of the dynamic changes the continent is undergoing. It is a feature length documentary film in cinema quality, produced, shot and directed by a two-person team. All the other creative input for the film comes from people in the countries where the film was shot: the inspiration for the content, the designs, the music etc. Apart from the editing of the material, which took place in in Berlin, Made in Africa is actually made in Africa. The producing tandem with Geraldine de Bastion and René von der Waar is now teaming up with other young professionals for the post-production phase.

To finalize the production and for the film release, Made in Africa is currently crowdfunding via the online crowdfunding platform Indiegogo: www.indiegogo.com/projects/made-in-africa