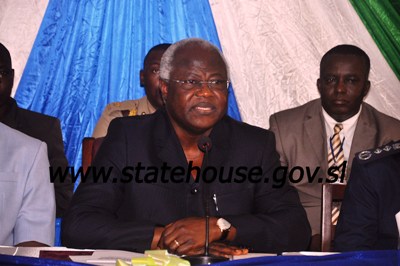 Our country is in the midst of a big trial. But by the grace of God, we shall overcome this Ebola outbreak. Many of our people have fallen victims to this disease. It was not a disease that started in Sierra Leone; it came to us from our brothers and sisters in our neighbouring countries. But no body, no region, no district wish this disease on themselves. Many people were doing very ordinary things when they contracted the disease. They were attending funerals, visiting the sick, and caring for the sick when they became victims of the disease. Many of our doctors and nurses and other health workers were doing what God has called them to do, when they contracted the disease. That is why this disease is one of the biggest tragedies that has befallen our nation. But we shall overcome this trial.

But to overcome it, all of us must play our part. This is because if just one person does not play his or her part to contain this disease, this trial will not end. That is why it is very important that every body must know what they can do to avoid getting the disease and prevent others from getting the disease. My Government has declared a three-day stay at home Ose to Ose Ebola Tok campaign to get this message to every house and family in the country. Everybody in every house in every community in this country is very important in our fight against Ebola. Avoid touching each other, avoid eating bush meat, avoid visiting the sick, avoid attending funerals, report illnesses and deaths to the nearest health facility or call 117. We know some of the things we are asking you to do are difficult. But life is better than these difficulties. Today the life of every one is at stake, but we will get over this difficulty if all do what we have been asked to do. Ebola is no respecter of persons. It is not an APC or SLPP disease. It is not a disease of any political party, or ethnic group or district. Anyone who is not careful can endanger themselves and others that they love. These are extra-ordinary times, and extra-ordinary times require extra-ordinary measures.

The Ose to Ose Ebola Tok campaign is one such extra ordinary measure. The three-day campaign will start tomorrow, Friday the 19th, and ends on Sunday the 21st of September 2014. During this ‘Ose to Ose Ebola Tok’ campaign, 7136 trained teams composed of health workers, community volunteers and other NGO partners will be going from house-to-house across Sierra Leone to raise awareness about the Ebola virus disease and enlist family/community support and participation to the response. It is necessary that all family members are met at home by the visiting team members who will provide correct information on the disease, advice family members on what to do if a family member is sick, promote hand washing with soap as an effective means of protection, share some information material on Ebola and mark their homes with a sticker

During this period all persons (except for authorised persons on essential services) should stay at home. During consultations with the inter-religious council of our country, we have agreed that our Muslim and Christian families should pray at home on Friday, Saturday and Sunday, while reflecting and planning on what to do to protect the family from Ebola. We are a nation of great faith, a nation that lifts up its hands in prayers to the Almighty for our actions to be blessed, our sick be cured, our bereaved be comforted and the healthy ones amongst us secured. We must not relent; we must bring unto this fight our faith, our prayers, and our resolve. But let us also remember it is part of faith to obey the laws of life; for without life, there can be no faith. The Ose to Ose Ebola Tok is about preserving our lives and securing the blessings of our prayers.

During the Ose-to-Ose Ebola tok’ campaign, it is important that the police maintain public order. In doing so, however, the security forces have a public duty to exercise maximum restraint so that peace is preserved and the rights and dignity of every Sierra Leonean are upheld to the extent possible. The police will urge anyone who is found on the street without good cause to go straight home. I ask you to comply so that we each play our part in making this campaign a success.

It is important also that you listen to radio stations during the stay at home campaign. Government and its partners are ensuring that radio stations around the country specifically broadcast messages relating to the fight against Ebola during the period.

Similarly, in order to respond to non-Ebola related emergencies like very sick children, women in labour and other life threatening medical emergencies like accidental injuries, asthma, diabetic, heart attacks and the like, special ambulance services will be provided in each district

In addition, Government has also put in place modalities to address issues relating to burials of non-Ebola related deaths and international travellers in and out of Sierra Leone.

Fellow citizens, Let me also state that the three-day Ose to Ose Ebola Tok by itself will not end the outbreak. But if everyone follows the messages given to you by the teams visiting your homes; the campaign will greatly help to reverse the increasing trend of disease transmission and become a very big boost to our collective efforts to stop the outbreak. The survival and dignity of each and every Sierra Leonean is at stake; all what we have toiled for as a people is at stake; this is a fight for each and every one of us; this is a fight for this land that we love. We have shown great resolve as a nation to overcome tragedy and become a symbol of recovery, democracy and peace in the world. Early this year the United Nations hailed us as a symbol of recovery; the world hailed us as an example of growth, democracy and great possibilities. Like all countries, we have our challenges, we have our weaknesses, we have our differences, and we have accounts of efforts we could have exerted in a much better way. But we are also a nation with a proud inheritance of achievements, and we are a nation with a positive place in the story of the resurgence of Africa, we must not allow Ebola to remove us from this story of resurgence. We are country of faith, resilience, and a great resolve for life and growth. We have surprised many before who thought this country shall not rise again; we have collectively taken many strides which many countries affected by war would only dream about. We must do it again. Ebola is not this nation’s portion, we must stand together to root it out, and this campaign must give us greater strength to root it out. 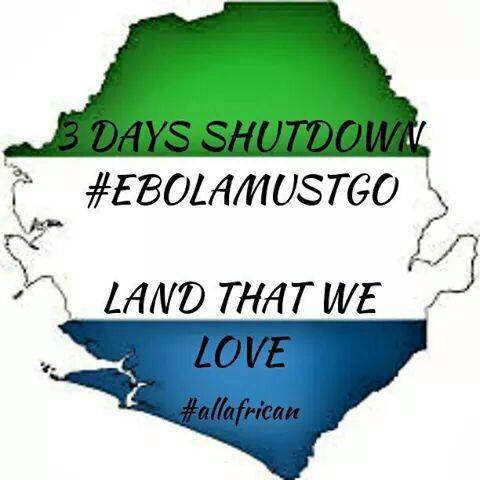