JSC: Jamaicans in Solidarity with Cuba 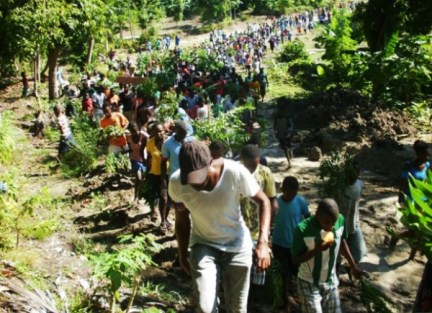 The people of Île à Vache are organizing, marching and fighting back. They have formed the Organization of Île à Vache Farmers, refusing to accept the presidential decree appropriating their island as a tourism zone and unilaterally annulling their property rights. – Photo: Dady Chery

The Washington colonists are back in Haiti, re-enslaving. Bloodhounds have been set loose by the Washington puppet Haiti government on free Haitians at Île à Vache (Ile a Vache/Ilavach), who are fighting back.

It’s 2014, not 1704, but a bloody manhunt with hound dogs and weapons of war is let loose on the unarmed Île à Vache Haitians. These Haitians are descendants of enslaved Africans and freed U.S. Blacks who immigrated in the 19th century after America’s Civil War began.

When the people refused to leave their coastal properties to make way for foreign tourist resorts, empire sent in its U.S.-trained local…