We need to understand the realities of our new models of development, supported by the UN and The World Bank and driven by the corporations and billionaire philanthropists so far removed from the realities of life. This new model doesn’t seem to be working for the people that it’s supposed to help. The question remains whom this development is for then?

Exploitation of resources and economic slavery has been re-packaged as positive economic policy for development. Once again, as in ‘The Emperor’s New Clothes’, one only sees the illusory nature of such re-packaging of development policies. This model DOES NOT WORK, and the sooner we begin to realise it, the sooner we can fix our escalating problems. 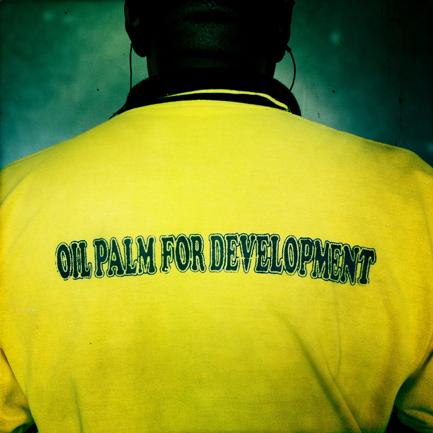 Kalangala district in Lake Victoria, Uganda is one of those many places all over the world that are losing not only their rich bio-diverse environments but also a sustainable way of life and culture, and all this in the name of development. A Kenyan-Malaysian palm oil company has been clearing the ancient tropical forests on some of the islands in the district to grow palm. For a select few, it is a welcome ‘development model’, while for the majority it is nothing but plundering of their resources and pushing them into acute poverty. I met up with some of the plantation workers during my visit there.

We have been tricked and brought here to work, now we don’t even earn enough to buy a ticket home.

Workers coming from conflicted and poverty stricken regions of the country are stuck at the plantation, they are modern day economic slaves who have no way to earn enough to sustain and they are not able to even go back to the places they came from.

They have taken the money for social security fund but I don’t know where that money has gone. They don’t want to tell me. They have robbed me.

A worker with his ID card and wondering how he will be able to demand his minimum wage and his social security benefits. Most workers are paid in cash and work as daily labourers, having no way of demanding for their minimum expected wages. 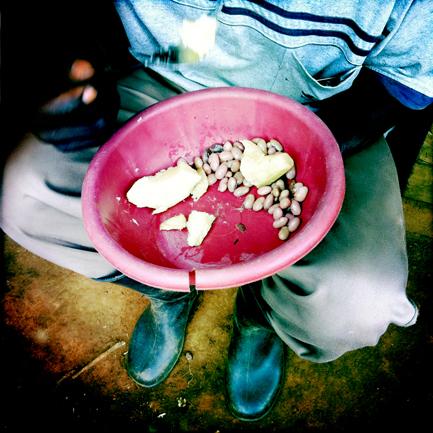 That’s all we can afford to eat everyday, unless we work outside the plantation illegally, but then you can be sacked from the company if they find out.

Most workers live on meagre supply of beans and maize from and can hardly manage more than a single meal a day, so many of the plantation workers go to the forests or surrounding fields to look for other sources of food, including field mushrooms, leaf spinach and grubs. Anything and everything is utilised.

We have to rent all the tools from the company and we end up paying most of our salary as rent.

The company takes rent for tools including hoe, machete, wheelbarrow and even gumboots from the workers. Effectively the workers end up paying most of the salary back to the company. An average worker barely manages to earn less than 50 $ cents/ day. A true demonstration of the level of exploitation a company can do in the pursuit of profit maximization. 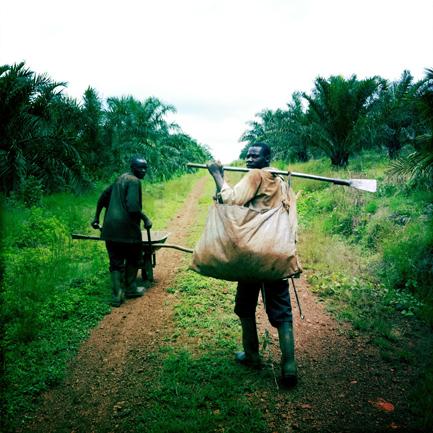 It’s a hard life. You require a lot of strength to work and if you fall sick, the company doesn’t do anything for you.

The workers start at 7 and work till 2 or 6 o’clock. The work involves planting, spraying, harvesting of the palm fruit, which is all done manually and requires a certain level of physical strength.

I have left my wife and six children in the village. I last saw them six years ago and now I don’t know how they are.

Most workers come to work on the plantation leaving their large families behind in hope that they would be able to send money back and sustain the families. When they are not able to do that, many workers vulnerable and in distress turn to stealing food or burning wood for charcoal to get by and risk getting arrested.

The cheap and plentiful labour and resources of the countries like Uganda are being exploited by the corporations to produce commodities like biofuel. These are supported by the governments of the west proclaiming them as ‘economic salvation for the poor countries’, while the only economic salvation they provide is to corporations and corrupt governments. The masses are not benefiting, but only suffering due to environmental and social loss. 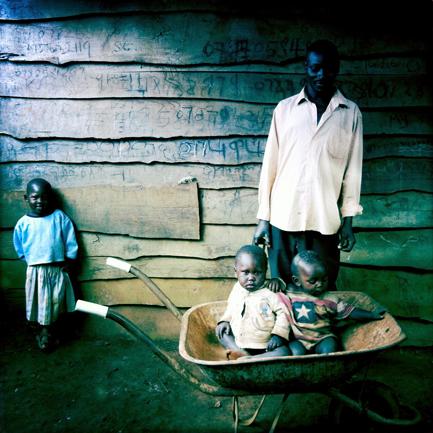 Text and images by Chintan Gohil from The Source Project.

The Source project is a self funded venture looking to create media that positively connect and communicate some of the most important issues being faced by our environment and as a result our societies and cultures. We need to begin to understand the environment as well as the issues before we are able to move towards the numerous and sustainable solutions.

The story of plantation workers is just one part of a story of social and environmental destruction taking place on the island.

Relevant extracts from the African Charter:

The right to property shall be guaranteed. It may only be encroached upon in the interest of public need or in the general interest of the community and in accordance with the provisions of appropriate laws.

Every individual shall have the right to work under equitable and satisfactory conditions, and shall receive equal pay for equal work.

One thought on “PALM OIL FOR DEVELOPMENT? – A land-grabbing story from Uganda”